The New York Times still marks some stories as “Analysis.” You won’t find that word in Kentucky’s two main papers anymore. The old school of journalism is dead at the Lexington Herald Leader — and also The Courier-Journal, by the way. They purposely and consistently blur the line between news and opinion. As I said in my editorial below, “Opinion creeps from the editorial page to the news pages in silent steps” Well, that was written in 1998. Today, opinions don’t creep off their assigned spaces — they run wild, more of less without barriers, because editors allow it, and seemingly encourage it.

I’ve seen no better example than the story on the front page, above the fold, in today’s Lexington Herald Leader. Read it here, http://ow.ly/TGV6J

The headline reads: “Whether he knew or not, Pitino has to go.” The subhead was: “It’s time for coach to put the program ahead of himself.”

And the very first sentence of the story: “Rick Pitino has to go.” A short, one-sentence paragraph.

The writer’s opinion continued dominated paragraph two: “That’s clear now. It doesn’t matter if the Louisville basketball coach didn’t know. He should have known. It’s his program. It’s his responsibility to know.” The whole story goes that way — clearly an editorial on the front page masquerading as news.

Peter Baniak, are you on vacation? Do you have no shame? Running editorials on the front page! It shows a complete disrespect for the readers.

Today it’s about sports; tomorrow it could about a politician that certain people at the paper don’t like.

The following is an editorial I wrote on this subject. It ran June 30,1998, in The Kentucky Gazette.

One of the amazing myths in American society is that newspapers are impartial public servants. Newspapers are neither impartial, nor public servants. They are businesses out to make money by gathering information about people and selling it, while at the same time receiving additional bucks from people who pay to have information printed about themselves. It’s strictly business — news and advertising — and there’s not much benevolence about it. Quite to the contrary, newspapers that have achieved institutional status, like The Courier-Journal and Lexington Herald-Leader, are used as instruments to mold society to the image of what the editors think society ought to be — which, for the C-J and Herald, is liberal.
The late J. Ed McConnell said a person should gamble a little every day because, “You might be walking around lucky and not even know it.” Well, the newspapers you read every day may be liberal (or conservative) to the bone — not just on the editorial page. But they handle it with such finesse, you might not even know it.
Another myth about newspapers is that opinions stay on the editorial page. They don’t. Opinion creeps from the editorial page to the news pages in silent steps. One way is story selection. Choosing what stories to write about is, in fact, an editorial statement. Thus, the doctrine of editors is presented to the public on a daily basis...unnoticed with the news. And it’s not co-incidental. The editors know it. A recent example is the controversial series of stories by The Courier-Journal on coal dust sampling — clearly a massive editorial.
The newspaper industry has a name for stealth editorial statements masquerading on news pages: it’s called civic journalism. Or, some call it democracy-enhancing journalism, because the aim, in the words of a co-founder, is to “help public life go well by reengaging people in it.” In other words, instead of explaining the community, convene it; instead of exploring the issues, solve them; instead of exposing wrongs, campaign against them.
Max Frankel, the former executive editor of The New York Times, said, “The ardent civic journalists of today are not content to tell it like it is, they want to tell it and fix it all at once.” Knight-Ridder and Gannett — the owners of the Herald-Leader and Courier-Journal, respectively — are adherents and practitioners of democracy-enhancing journalism.
In addition to the editorial page and story selections, a third way that newspapers color themselves is through the biases of writers — all of whom have beliefs that find their way into stories. Writers are always visible just behind their words. They don’t plainly slant the news; that would be unfair and unprofessional. What happens is that all stories are written with stresses, colorations and emphasis that favor a writer’s view about “public life going well.”
As language passes through a writer’s mind something happens akin to bees making honey. As described by naturalist John Burroughs (1837-1921): “The hive bee does not get honey from the flowers; honey is a product of the bee. What she gets from the flowers is mainly sweet or nectar; this she puts through a process of her own, and to it adds a minute drop of her own secretion of formic acid. It is this special personal contribution that converts the nectar into honey.” And writers contribute minute doses of attitude — shades, colors and accents — that turn ordinary news into unnoticed commentary.
The influence of the state’s two largest newspapers is tremendous, but not as profound as commonly perceived. As the numbers printed by the Gazette in this edition show, the Courier-Journal’s circulation outside Jefferson County penetrates just 4.7 percent of the households in Kentucky; and the Herald-Leader’s circulation outside Fayette County penetrates just 4.9 percent. But more importantly, they are read by movers and shakers and decision-makers. And the multiplier effect is enormous: AP rewrites the papers’ stories for its members; and, consequently, TV and radio broadcasters rip and read primarily from the state’s two dominate printcasters.
It’s too bad that the state’s news mechanism is controlled by out-of-state-owned companies whose philosophies on public life are counter to most Kentuckians. Long live the First Amendment. But in the long-term, the news media can be more dangerous than politicians.
— Lowell Reese, publisher

Kentucky Roll Call was formed in 1990 by Lowell Reese as a public affairs publishing company. Today, the company's publications include Kentucky Roll Call newsletter, The Kentucky Atlas — a book of place names in the commonwealth, Who's What In Kentucky — a pictorial directory of legislators, Second Circle — a pictorial directory of lobbyists, Mr. Butler's Classic Quotations — a book of nature quotations, all of which apply to the art of lobbying, and Kentucky OSHA Journal — a newsletter on health and safety in the workplace.
How to Review, Order Books
To review the books and to download order forms, go to Kentuckyrollcallbooks.com.
Contact us
Mail address: Kentucky Roll Call, PO Box 1233, Frankfort, KY 40602
Phone: (502) 875-7745
Fax: (502) 875-7749
E-mail: Reese@kentuckyrollcall.com

The World of Nature on Effective Lobbying

Guide to Cities, Towns and Widespots in Kentucky

Kentucky's public employee pensions: A primer on the state's six systems and abuses 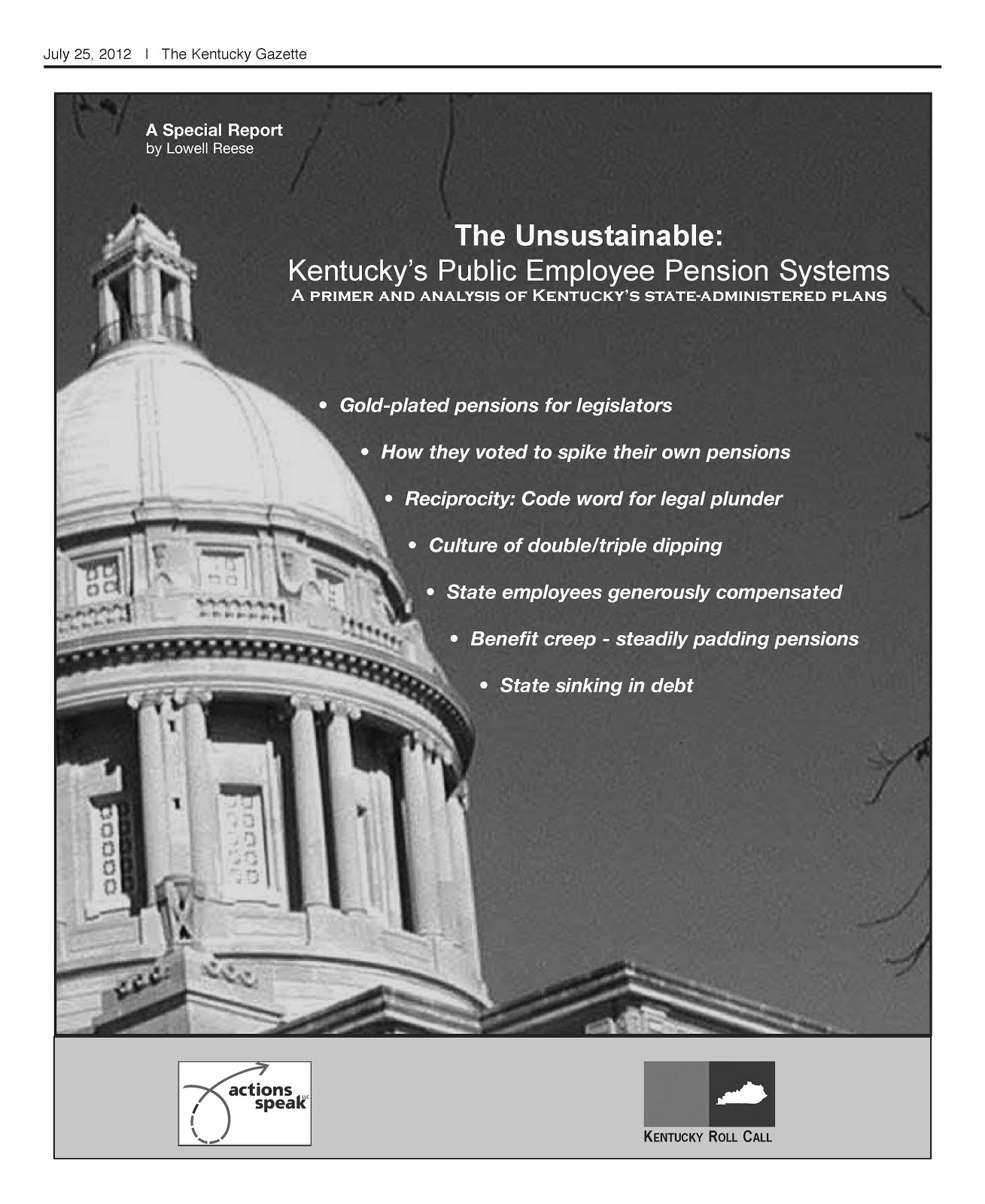 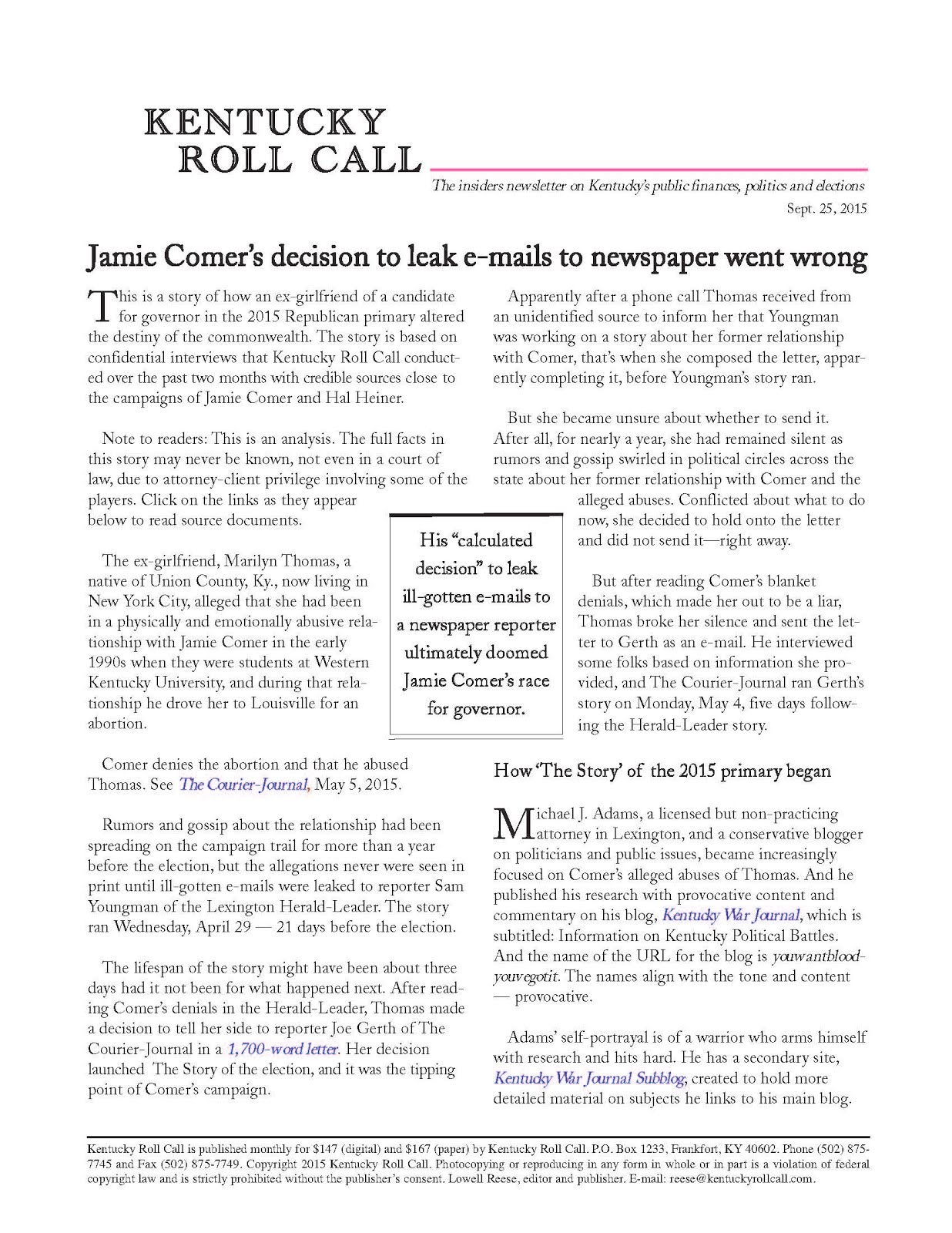